Lilies and cats do not mix. Easter Lilies and many other members of the lily family including day lilies, Asiatic lilies, tiger lily, stargazer lily, rubrum lily, red lily, western lily and wood lily are poisonous to cats.  Their toxic potential in other animals is not known at this time. The exact cause of toxicity is also unknown.  The toxin causes severe kidney problems (renal tubular necrosis) within two to three days of ingestion.  Therefore, I do not recommend bringing this plant into any household with cats!

All parts of the plant are poisonous with the flowers containing the most poison.  Death may result within hours in cats that eat several flowers. Even the pollen is toxic.  If your cat is exposed, bring them in for veterinary care immediately!  This is not something you can treat at home.  If you suspect toxicity, please do not delay. Unlike other animal species, lily exposure in cats causes severe kidney disease that often leads to death.

Initial clinical signs of toxicity include vomiting, lethargy and anorexia. As the toxin damages the kidneys, the affected cat becomes depressed, weak, salivates and drinks a lot of water. Some cats will lay with their head on the water bowl and drink constantly. As the kidney damage progresses, the kidneys may become unable to produce urine. Death is coming soon. 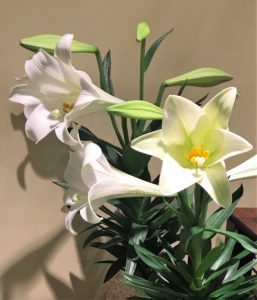 Several years ago I treated a beautiful kitten for renal disease.  The rambunctious girl jumped up on the counter to investigate the Eater Lily that adorned her home.  Some of the pollen stuck to her nose as she sniffed the flowers.  She licked it off and then left to play with more interesting toys.  Two days later, the kitten felt awful.  She refused to eat or drink.  When I examined her, I felt her kidneys bulging beneath the skin.  She screamed in pain when I touched (palpated) them.  The swollen kidneys were twice as large as normal.  Blood work confirmed what I already suspected, the kitten suffered from severe kidney disease caused by the Easter Lily.

With aggressive therapy, some of these cats do recover from the poison.  The kitten mentioned above was a terrible case of poisoning.  At the beginning of therapy, her blood urea nitrogen (BUN) and creatinine levels were off the charts.  After five days of fluid therapy, they fell back to the normal range.  She was lucky but it is best not to take chances with lilies.

More information on lily and other toxic plants can be found at the ASPCA. Here’s the link to the ASPCA poisonous and non-poisonous plant list https://www.aspca.org/pet-care/animal-poison-control/toxic-and-non-toxic-plants