Vipers inject venom into prey through two large fangs that protrude from the upper jaw. The venom is a mix of toxins and enzymes that will immobilize the prey and destroy the tissue in the area of the bite which allows the venom to spread more quickly. It includes myotoxins, cytotoxins, neurotoxins, cardiotoxins and hemorrhagic toxins. The venom from rattlesnakes is the most toxic followed by venom from water moccasins and copperheads in that order. The snake controls how much venom is injected per strike. Young snakes tend to deliver their entire load of venom whereas mature snakes may not inject any venom at all. This is referred to as a ‘dry bite’.

Swelling, bruising and pain are the most common clinical signs of a snake bite. Dogs are often bit on the head or legs which is a good thing because the venom spreads more slowly from these areas when compared to the torso. Swelling develops quickly and may cause airway obstruction. Snake bites are very painful! Dogs will yelp, moan and cry if the affected area is touched. The venom also interferes with the victim’s ability to clot their blood. Bleeding from the nose, mouth and eyes as well as bloody urine or feces are common. If this isn’t bad enough, some rattlesnake venom contains neurotoxins. Dogs may suffer a variety of neurologic signs from difficulty walking to paralysis, seizures to coma.

The goal of treatment is to neutralize the venom with antivenom as soon as possible. Best outcomes occur when the antivenom is given within 4 hours of the bite. The antivenom is made of antibodies, either the entire IgG or fragments of IgG, given through an intravenous catheter.  Again, time is of the essence.  In addition, patients need fluid therapy to treat shock and strong pain management. Some patients may need blood transfusions if bleeding is severe. Unfortunately, even with aggressive therapy, some dogs will not make it. Pictured below is a dog who was bitten on the left side of the lip by a Western Diamondback Rattlesnake. Severe swelling was noted on the lip and neck. This dog was treated with ‘Rattler’ Antivenom. This is the only antivenon that has antibodies against the Mohave rattlesnake venom. The swelling started to recede within ten minutes of starting treatment and she made a complete recovery! 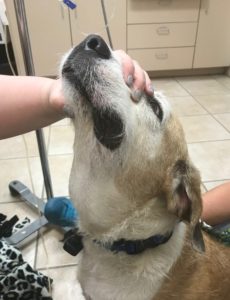 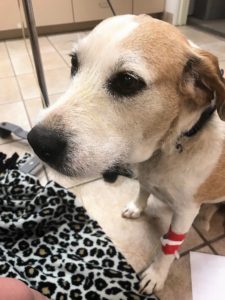 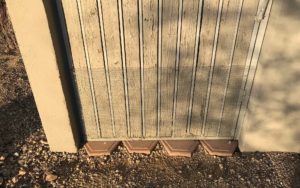 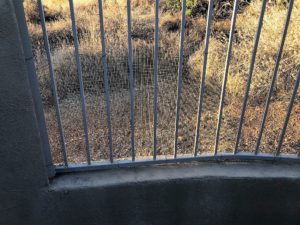 2 replies on “Rattlesnake Bites in Dogs”