Tartar in dogs and cats will fluoresce when exposed to ultraviolet light. Bacteria found in the mouth produce porphyrins that emit a pinkish orange glow. In fact, researchers have found feline, canine and human tartar as well as bacterial cultures will fluoresce as well. Why is this important? Because fluorescence can be used to look for tartar during dental cleanings. Below is a picture of a dog’s mouth under regular light. Note the tartar on the large canine tooth next to the gum line. Under room light, tartar appears tan. The next photo is taken while illuminated with ultraviolet light. The large clump of tartar is more prominent in this picture due to fluorescence. 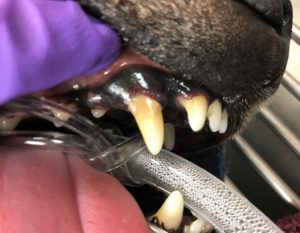 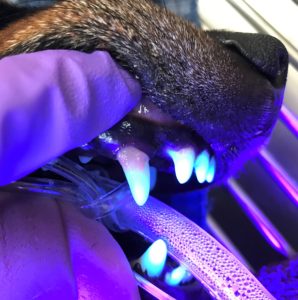 After the dog’s teeth were ultrasonically scaled and polished, the ultraviolet light was used to look for any tartar that may have been missed. As you can see in the picture, this dog’s teeth look great. No tartar remained after the cleaning. Ultraviolet light is great for finding small amounts of tartar buried along the gum line that is difficult to see. In addition to the ultraviolet light, I run a probe along the gum line feeling for remnants of rough tartar on the smooth enamel surface of the teeth. 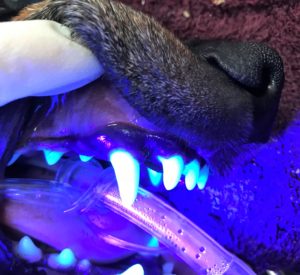 For more information on what is involved in a proper dental cleaning and why a complete oral examination and periodontal treatment cannot be done without anesthesia, please go to Arizona Skies Animal Hospital.