Dental disease is a common problem in cats. Some cats get a build up of tartar that is easy to see. Other problems are more subtle and require dental X-rays to assess what is happening below the gums. Look at the teeth pictured below. The tooth on the right (Third premolar,  #408) is normal but the tooth on the left (Molar, #409) is diseased and causing a lot of pain. Look at the reddened gum below it. Inflammation characterized by redness and swelling are common signs of dental disease in animals of all kinds. Now look at the far left side of the tooth. See the reddened area that looks like a piece of enamel was chipped off? This is an odontoclastic resorptive lesion (FORL). It doesn’t look too bad on the surface.

The truth is that this is a severe lesion. The x-ray below is the reverse image of the teeth above. Now the normal tooth (408) is on the left while the abnormal one (409) is on the right. Almost half of the crown has been eroded by the cat’s immune system. With time the nerves will be exposed causing chronic pain.  When a probe was run over the area, it made the cat’s jaw move even though he was anesthetized!  The pain was immense. 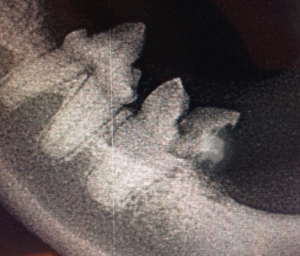 In practice, I have found that this condition is often symmetrical. Below is the dental X-ray of the same two teeth on the other side of the lower jaw.  The premolar (308) is on the right and the molar (309) is on the left. Although the crown is normal, the root on the left side is not. 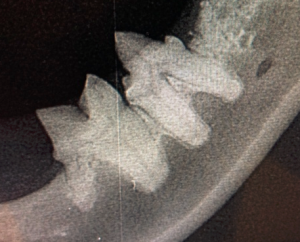 Both of these teeth were extracted shortly after the films were taken. The cat’s mouth was sore for a few days but he quickly returned to normal. Two weeks later, he was eating dry food again.

Dental pain can be excruciating.  Unfortunately, animals deal with it in ways that make it difficult to know they are suffering.  Their stoicism does not help us always appreciate the  pain they endure.  Please make certain a thorough dental exam and treatment are part of your routine animal care.