Bringing a new puppy home is wonderful. Family members shower the little one with love, wanting to spend every possible minute with the new bundle of joy. But please remember, this is a very stressful and overwhelming time for the puppy. Leaving their canine family, mother and littermates, for a new human family all on their own is a big adjustment. Here are my suggestions for helping young puppies transition to their new home:

1) Crate train the puppy– Crates serve many important functions.   First, they keep the puppy safe when a human isn’t around to supervise. When puppies explore their environments, they get into all kinds of trouble – biting electrical cords, falling into pools, eating all kinds of things, rolling down stairs, interacting with dangerous animals, etc. Confining them to a crate keeps them out of harms way. Alternatively, an exercise pen or confining the pup to a small room with a baby gate may also work well.

Second, crates provide a secure resting place. For most puppies, going to their new home is the first time they are alone and separated from their littermates. Giving them a crate filled with blankets, toys and a hot water bottle makes them feel less lonely. I recommend placing the crate in the bedroom right next to your bed. If it has a top that opens, the new pet parent may let their arm dangle into the crate from the bed to provide extra reassurance. Alternatively, the crate may be placed on the bed. I know a couple who placed their pup’s crate between them to prevent night time howling. They left it there for a week and then slowly transitioned the youngster off the bed. Remember, the crate doesn’t need to stay in the bedroom forever. Once the pup adjusts to their new life, it can be moved to the desired location.

Third, crate training helps with housebreaking. One of the first things a puppy has to learn is where to urinate and defecate. It takes awhile to learn the difference between indoors and outdoors. I advise clients to purchase a crate that will accommodate the pup when fully grown then block it into a smaller space. Since most pups will not urinate or defecate in their bed, it teaches them to hold it. If your pup is urinating and defecating in their crate, it is probably too big or they are not being taken out frequently enough.

2) Feed small frequent meals– Puppies are prone to hypoglycemia which means low blood sugar. Clinical signs of hypoglycemia include lethargy, stumbling, seizures and/or coma. To prevent hypoglycemia, I recommend feeding puppies several meals spaced throughout the day. As the pup grows, the length of time between meals may be increased until the desired twice a day feeding schedule is achieved. How often a puppy eats depends upon their age and breed. In general,   8 week old large or giant breed puppies do well on three meals a day while toy breeds need 4 to 5 small meals. If your puppy becomes lethargic or acts drunken, give them honey right away. Put it in their mouth and seek veterinary care immediately.

3) Safe toys-Provide toys that are appropriate for the pup. Too often, people choose toys based on their own preferences rather than the pup’s. Watch out for soft toys with squeakers. I have seen dog’s chew out the squeaker, swallow it and then require surgery to remove it.  I recommend a variety of toys with different textures and shapes to stimulate the pup’s senses. I also like the ones that can be filled with food or treats for the pup to find. During teething, toys may be chilled in the fridge to provide comfort to inflamed gums. Please do not place the toys in the freezer as they pup’s tongue may stick to the toy.

4) Regular trips outside to urinate and defecate-Puppies need to go outside more frequently than adults because their kidneys are immature. They simply can’t concentrate their urine like an adult can. For most 8 week old pups, I recommend taking them out every 2 hours to urinate and right after eating to defecate. As they grow, the time can be increased.

5) Give the puppy plenty of rest-With the excitement of a new puppy, it is easy to forget these little ones are babies  that need rest. I know one golden retriever puppy who suffered from severe anxiety that all started on her first day in her new home. On the way home from the breeder, the family stopped at a pet store for supplies then ate lunch at the local café.  She had 2 hours to get to know her new home before the family took her to a surprise birthday party. She was passed from person to person to person. Finally, when the exhausted pup wouldn’t play anymore, she was placed in a crate while the party continued. The next morning, more visitors arrived and the puppy was passed between more people. This puppy had been one of the most outgoing, gregarious members of her litter. She became a very fearful dog who needed tranquilizers to leave her home as an adult. Remember, go slow with puppies!

6)  Additional tips-I mentioned giving pups a hot water bottle in their crate to imitate the feeling of sleeping next to another puppy. I would never use a heating pad for fear that the pup may bite the cord. If there is another dog in the house who accepts the pup, they could sleep with them as well. Be sure to give the adult dog breaks from the pup as we all know how stressful babysitting can be. When the pup is alone, leave the radio or television on for company. 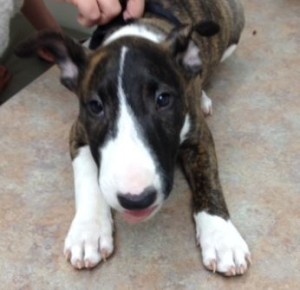 Adopting a puppy is wonderful. Following the tips listed above, will help your dog become a loving addition to your family!

Remember, bring the puppy in for a veterinary examination right away.