On Memorial Day, I was reflecting on veterans.  I believe it is fitting to honor all veterans. both humans and animals, who served in the armed forces. The humans return to the United States but what happens to the animals?  In the case of working dogs, many are left in the country where they served even though their handlers want to adopt them. I was recently shocked to learn that highly trained dogs are often left at animal shelters.  In 2013, Congress passed an amendment to the National Defense Authorization Act that made it easier for handlers to adopt their dogs.  They streamlined the process for adoption and provided a system for veterinary care.

Unfortunately, the amendment only really works for dogs who are retired while residing in the United States. The amendment had a loophole, one little word that still allows dogs to be left behind when retired in foreign countries.  Now a group a military dog handlers with the help of the American Humane Association are working to remove the loophole. They urge legislators to amend the National Defense Authorization Act to read , “Military dogs shall (not may as it is currently worded) be returned to the United States after their service ends.”

Currently, dogs that are retired out of country face a long tough road getting back to the United States. Cost is a big factor.  According to reporter Stephen Gutowski, “The American Humane Association spent nearly $6,000 to bring a dog named Maxie back from Japan last year.” Most handlers simply can’t afford this kind of expense without help.

Many of the handlers suffer from a variety of health conditions when they return.  We know of PTSD and how difficult it is for those who suffer from the condition.  It is important to know the vital role animals play in helping those with PTSD.  Many veterans are able to leave their homes because they know their animal has their back.  The confidence and peace of mind these dogs bring their old friends has a healing quality for both sides of the leash.

So I join many others in asking Congress to change “may” to “shall”.  It is the ethical response a grateful nation owes to the animals who served us so well.  In so doing, their service will continue for their human partners. 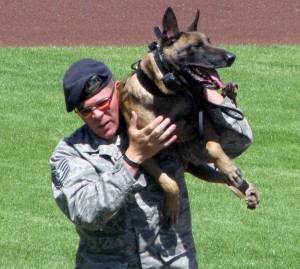 -Gutowski, Stephen. Military Dog Teams Push to be Reunited After Their Fight is Over. Washington Free Beacon2012.

-Quinn, Melisssa. Four Legs and a Life of Service: The Fight to Allow Military Working Dogs to ‘Retire’ an U.S. Soil, The Daily Signal August 23, 2014.