Last week, a client brought in a fecal sample from their puppy. The dog had been given a medication to kill internal parasites called fenbendazole. What are the long white worms called? How did the pup get them? (The intestinal parasites or worms are the things that look like spaghetti noodles.) 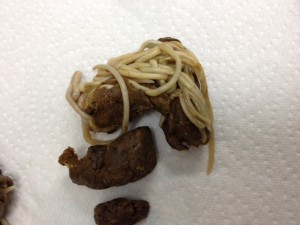 Roundworms are a common problem in puppies. They can become infected from their mother’s while in the uterus (transplacental infection) or while nursing (transmammary infection) or by eating the infective larval form of this parasite. Once inside, the larva migrates through the pup’s body until it reaches the lungs. The pup coughs and then swallows the larva back into the gastrointestinal tract. Eventually, the larva matures into an adult worm in the small intestines and starts laying eggs to infect a new generation of dogs.

***Note: Roundworms can infect humans. Please check your pet’s feces for parasites at least once a year.